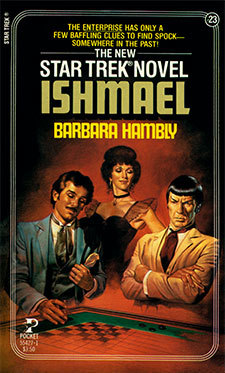 Ishmael is a novel of the Star Trek Expanded Universe, written by Barbara Hambly and first published in 1985.
Advertisement:

Spock is transported back in time to the 1860s, where he loses his memory and is taken in by a man named Aaron Stemple, who dubs him "Ishmael". Stemple is the target of time-traveling Klingons who have identified him as the key figure in human history.

The 1860s setting of the novel is inspired by the 1968-1970 historical TV series Here Come the Brides, the joke being that Aaron Stemple, who is implied in this novel to be one of Spock's ancestors on his human side, was played by Mark Lenard, who also played Spock's father in Star Trek: The Original Series. The novel is, however, written so that no knowledge of Here Come the Brides is necessary (and indeed doesn't explicitly mention the connection, since it was done without actually obtaining the rights to that series).

Not to Be Confused with the philosophical novel Ishmael (1992).