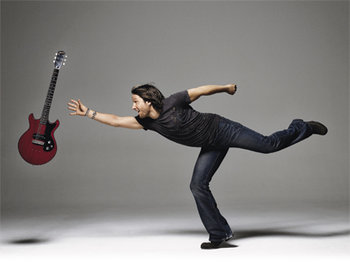 He started out in obscurity in the 1990s in Australia, but just released one album before disappearing from the solo scene. For the next several years, Urban bounced around Nashville and got several minor parts. He formed a band called The Ranch in 1996. They released one album and two singles, and disbanded in less than a year.

He went back out solo again in 1998, this time achieving success with his self-titled album for Capitol Records. Three of its singles made top 10, with one of those three ("But for the Grace of God", which he wrote with two members of The Go-Go's) going to #1, thus breaking a nearly three-year dry spell for the label. He returned in 2002 for his second album, Golden Road. This one got more critical acclaim and won him his biggest hit "Somebody Like You". It broke several records for country music, including most weeks at number 1 on Radio & Records, got him a fairly major hit at pop, and introduced him as a serious country artist.

The best was still yet to come for him though. He did go through some tough times with drug and alcohol abuse, going into rehab on several different occassions. In 2005 he released his third album, Be Here. It scored him even more radio hits and really grabbed the attention of the critics this time. By the time he released 2006's Love, Pain & the Whole Crazy Thing, he got the strongest critical response of his entire career yet. "Stupid Boy" scored him another Grammy.

He's been married to actress Nicole Kidman since 2006 and currently has two children with her. He released an album in 2009, Defying Gravity, which was critically panned for containing several mushy love songs, but its commercial success is undiminished. Then, his conquest for love songs was finally done right in 2010 with the release of Get Closer. After charting with the cut "For You" from the soundtrack to Act of Valor in 2012, he put out the New Sound Album Fuse in late 2013. Ripcord followed in 2016, producing his longest-lasting #1 hit to date in "Blue Ain't Your Color".

In 2012, he was a coach on the first series of the Australian version of The Voice, but will not be returning for season two after accepting an offer to join the judging panel for season 12 of American Idol.

Don't mistake him for most country artists. He's got qualities about him that make him country, but he's definitely not like his contemporaries. Even if he does play a six-string banjo (or "ganjo").