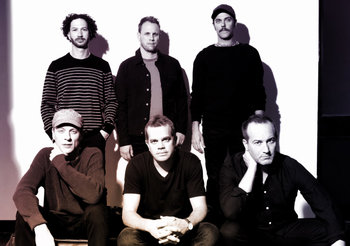 Left to right and up to down: Andy Farag, Kris Myers, Ryan Stasik, Jake Cinninger, Brendan Bayliss and Joel Cummins

Umphrey's McGee is a jamband, just like the Grateful Dead and Phish, but where the Dead jammed Folk and Country and Phish jams Jazz, Funk and Prog, Umphrey's jams everything. The main focus of their music might be described as "improg" (a term their bassist, Ryan Stasik, coined), but there are almost no genres they have not ventured in: they play Metal, Funk, Reggae, Mozart and whatever else enters their mind.

The band came together in 1998 at Notre Dame university, where Brendan Bayliss, one of their two guitarists, met Joel Cummins, their keyboard player in a class on music theory, Ryan Stasik, their bassist, and Mike Mirro, their first drummer. Later Jake Cinninger and Andy Farag joined as second guitarist and percussionist and when Mike Mirro amicably quit the band Kris Myers took over as a drummer, a formation that proved stable for the years to come.

While they often switch between different genres in one song, certain stylistic signatures persist: they really like odd time signatures, the composed parts of their songs are tightly structured, and a light sense of humor always lingers in the background.

Umphrey's McGee has a unique approach to improvisation, based on intense visual communication during songs. So for instance there are special handsigns for when someone should take the lead or hold back, or when it is time for a transition between different parts of a given song. They also had improvisational sequences called Jimmy Stewarts that were somewhat more planned out than others, in that for instance a specific order of time signatures or genres was agreed on beforehand. In recent years however they developed a more purely ad hoc approach.

Being a jamband with almost no mainstream recognition, Umphrey's has developed a close relationship with its fanbase, the core of which, the umfreaks, is intensely devoted, but also highly critical, and forms a tightly knit community and is one of the main reasons to keep attending concerts. The main online incarnation of this community is the bort

. The band goes to lengths to solidify the connection to its fans, as evidenced by the UMBowls

, where they let the fans decide in real time which music to play.

, where they, along with those of some other bands, can be streamed for a monthly subscription fee. They also stream their shows for roughly the prize of a ticket. The streams sometimes run into technical difficulties, but in those cases customers are compensated with either their money or another free stream.