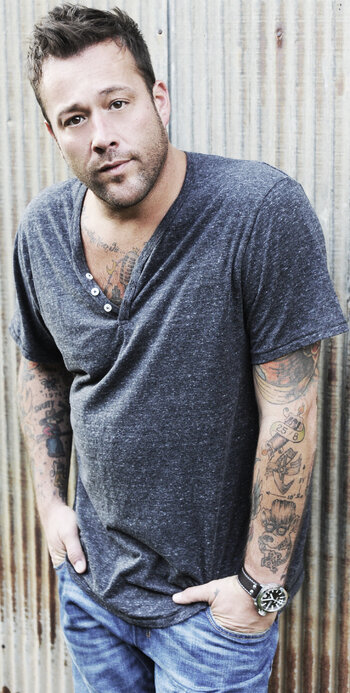 A country, rock, and rap artist, born Matthew Shafer in Mount Clemens, Michigan on June 6, 1974. Throughout the 1990s, Kracker was a protégé of Kid Rock and even played some instruments for Kid Rock, but did not break out on his own until 2000's Double Wide, which produced his debut single "Follow Me". His second album, No Stranger to Shame, accounted for his biggest hit in a cover of Dobie Gray's "Drift Away", with which he set a record for the longest run at #1 on the Billboard Adult Contemporary charts.
Advertisement:

Outside a guest appearance on Kenny Chesney's 2004 chart-topper "When the Sun Goes Down", Kracker was rather quiet until 2009 (thanks in part to his next album spending forever in Development Hell), when his career caught fire again with "Smile", a crossover hit that went Top 40 at pop, and Top 10 at both AC and country. Ever since, he has focused mainly on country-rock albums.