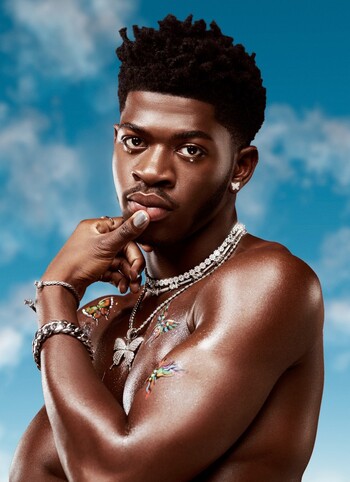 Montero Lamar Hill (born April 9, 1999), better known as Lil Nas X, is an American rapper, singer-songwriter, and Internet personality. He's recognized for his meme-heavy online presence (mainly through Twitter) and being one of the biggest success stories to come out of the TikTok app through his hit Country Rap single "Old Town Road".

Released at the end of 2018, the single first gained traction in 2019 and began climbing up the Billboard country chart. The magazine then controversially removed the song from the chart, claiming that it did not adopt enough elements of the genre to be classified as country. However, using the ongoing buzz to his advantage, Lil Nas X released a remix of the song with none other than Billy Ray Cyrus, and both versions of the song wound up peaking at #1 on the general Hot 100, famously holding Taylor Swift's comeback single "ME!" from the top spot and staying at that spot for a collective, record-breaking 19 weeks.note At one minute and fifty-three seconds, the original version is also Billboard's shortest number-one single since "I'm Henry VIII, I Am" by Herman's Hermits in 1965.

Lil Nas X's career continued from there by transitioning into a more mainstream pop sound with elements of trap, R&B and rock. He released his first EP 7 in late June 2019, and made headlines just over a week later (on the last day of June, which is recognized as Pride Month) when he came out as gay, becoming one of the most prominent black male artists in the LGBT community. His next release was his debut album MONTERO, wherein several of its singles ("MONTERO (Call Me by Your Name)", "Sun Goes Down" and "Industry Baby") show him explicitly talking about his sexuality and/or his experiences coming to terms with it for the first time. This subject matter and the imagery associated with it have elicited both widespread praise and controversy — which he often uses as further marketing.

Lil Nas X and his music provide examples of the following tropes:

The a cappella version of "MONTERO (Call Me By Your Name)", which is aptly subtitled "(But Lil Nas X Makes All The Sounds With His Mouth)".

Example of:
A Cappella

The a cappella version of "MONTERO (Call Me By Your Name)", which is aptly subtitled "(But Lil Nas X Makes All The Sounds With His Mouth)".