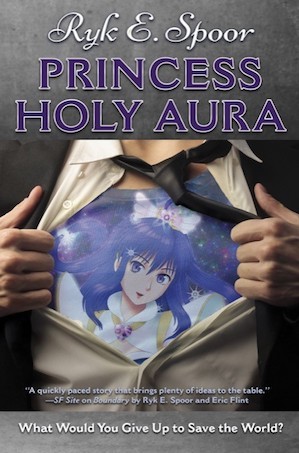 What Would You Give Up to Save the World?
"Then perhaps you can see why the word ‘Princess’ isn’t exactly appropriate,” Steve said sarcastically. “Let alone the rest of that hackneyed Magical Girl word salad you spewed."
—Stephen, in Princess Holy Aura
Advertisement:

is a 2017 novel by Ryk E. Spoor, and is his take on the mahou shoujo genre, more specifically the Magical Girl Warrior. Mid-30s overweight Stephen Russ is drafted / recruited / volunteered / drawn into saving the world as Princess Holy Aura, the first of the Apocalypse Maidens.