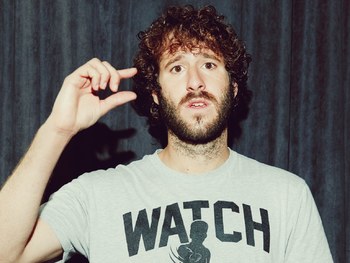 Even his artist image is self-depreciating
Advertisement:

David Andrew Burd (born March 15, 1988), better known by his stage name Lil Dicky or LD, is an American rapper and comedian. He came to prominence with the release of the music video to his song "Ex-Boyfriend", which went viral with more than one million views on YouTube in 24 hours. He released his debut album Professional Rapper on July 31, 2015.

He is known for putting out high production value videos that have continued to be successful on YouTube, and is known for having other high profile music artists feature on his songs. It could be argued that he may be One of Us due to the frequency of nerdy references in his lyrics and videos, and frequent use of humorous tropes. So far he has only released one full length album, but also has a couple mix-tapes and EPs to his name.

He's also the creator and star of FXX's Dave, which is loosely based on his life.