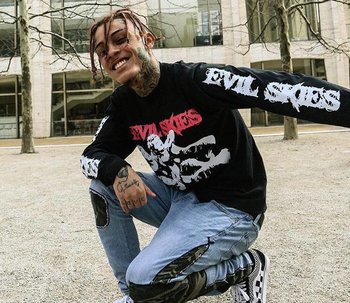 Kimetrius Foose (born on August 4th 1998) better known by his stage name Lil Skies is an american rapper who was born in Chamersberg, Pennsylvania and later moved to Waynesboro, Pennsylvania. Foose was inspired by his father, who was a musician, to create music, saying that he's had musical inclinations from as early as 4. At 12, Foose would begin writing his own lyrics and recording music. Foose has stated that his biggest inspirations are Wiz Khalifa and the late Mac Miller.

Foose's rise to fame started when he released the video for "Red Roses" which featured Landon Cube in October 2017, shot and directed by Cole Bennett. The music video gained 1 million views within a week, and as of October 2018, has over 100 million views. Since then, he has released his debut album, Life Of A Dark Rose, which peaked at #10 on the Billboard 200.

"I got tattoos on my face, I use that shit as motivation
I could never get a job, so for my dream, I'm dedicated"