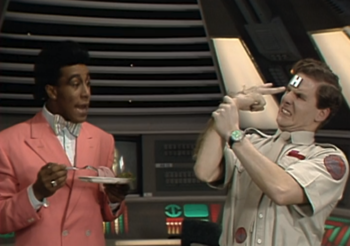 "Yo, goalpost head, I'm pretty sure your arm's only meant to have a mind of its own around sexy ladies!"

Sick and tired of Rimmer lording his power over him, especially now that he's hidden the ship's cigarette supply away, Lister hits upon the perfect way to put an end to it: by becoming an officer himself.