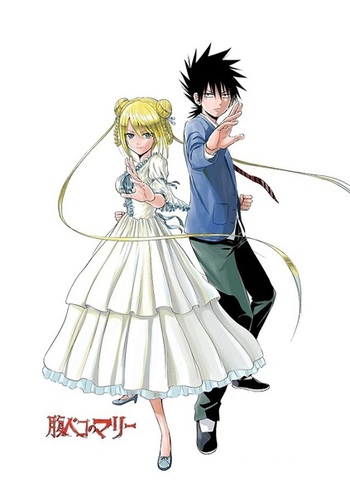 I am her and... She is me?
"Macaron… Waffle… Scone… Chocolate… Marshmallow… Pudding… Tart… Aah… I'm hungry…"
— Marie-Thérèse Charlotte
Advertisement:

A legend says that the ghost of a girl stands on the top of an old Catholic church, inhabited by the Sagimiya family. Said family has a hateful rivalry with the Bijogi, who manage a Taoist temple next door. In the middle of all this, Bijogi Taiga has had a crush on Sagimiya Anna, the demure daughter of the priest, since childhood.

Little did he know, the Sagimiya turn out to be involved in very un-Catholic activities: trying to resurrect the spirit of Marie-Thérèse Charlotte, the daughter of late French queen Marie Antoinette. And since he has found out, he will have to "collaborate" − i.e. be the human sacrifice to that end. Nevertheless, just before the "ritual", Taiga decides to confess his love to Anna… and is struck by a lightning bolt the second after. He miraculously survives without a scratch, but somehow finds himself in a body slightly more… blonde and feminine.

Hungry Marie (Harapeko no Marie) is a supernatural shonen manga from Tamura Ryuuhei, of Beelzebub fame. Like its predecessor, it features a healthy dose of absurd humor. Unfortunately, it only had a short serialization in Weekly Shonen Jump due to lack of popularity, running from February to October 2017 for 44 chapters and later compiled into four volumes.