Film / Jumanji: The Next Level 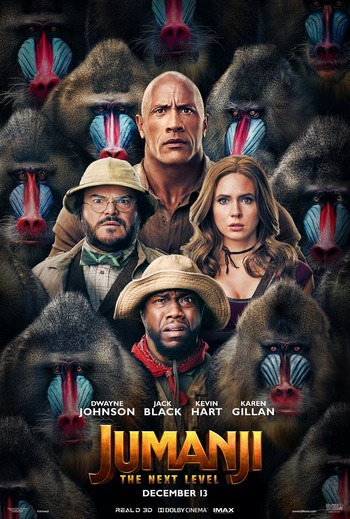 "This next adventure is even more challenging. And remember, the future of Jumanji is in your hands!"
Martha: I think [Spencer] went back in. We got to go get him.
Fridge: Are you out of your mind?!
Advertisement:

Jumanji: The Next Level is a sequel to the 2017 film Jumanji: Welcome to the Jungle, itself a sequel to the 1995 film Jumanji (and its Spiritual Successor Zathura). Directed by Jake Kasdan, it sees the return of Dwayne Johnson, Kevin Hart, Jack Black, Karen Gillan and Nick Jonas, who are joined this time by Danny Devito, Danny Glover, Awkwafina and Rory McCann.

Following the events of the previous film, Spencer secretly kept the pieces of the Jumanji video game, and while visiting from college for the holidays, worked to repair the system in the basement of his house. When Spencer's friends arrive, they find Spencer missing and the game running, and decide to re-enter Jumanji to save him. Spencer's visiting grandfather, Eddie (DeVito), and his estranged friend, Milo Walker (Glover), hear the commotion, and inadvertently get sucked into the game too. The teenaged friends must help Eddie and Milo get used to their in-game avatars and get their help to find Spencer and escape Jumanji again.

The film was released on December 13, 2019. Kasdan has confirmed that a third film retaining the same core cast is in development.

Jumanji: The Next Level contains examples of:

♫ Many a tear has to fall
But it's all in the game
All in the wonderful game... ♫