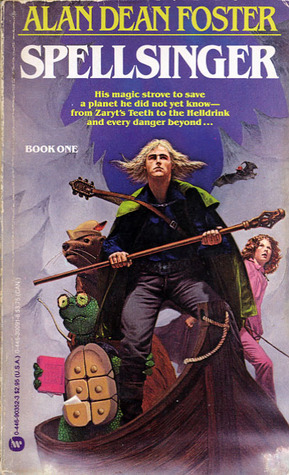 The Spellsinger series is a fantasy series written by Alan Dean Foster.

In the first book, Spellsinger, the hero Jonathan Thomas Meriweather, also known as Jon-Tom, is a prelaw student with pretentions to rock stardom, who is innocently smoking pot when he's abruptly transported from the University of California at Los Angeles to a weird world in which animals talk, wear clothing, and live alongside humans by the turtle wizard Clothahump, who was searching for a great wizardly "En'geeniar" (meaning an engineer, as he was under the impression that this is the name our world gives to wizards). Unfortunately, he caught Jon-Tom, a law student and would-be rock star who works part-time as a janitor and on his pay stubs is called a "sanitation engineer"note and his mind was "the most receptive" at the moment, which might have had to do with that joint he smoked.

It all works out for the best, though, as Jon-Tom soon discovers that in the magical world he has the power of a spellsinger: a wizard who can make powerful magic through music. Using this new-found power, he and a cast of creatures set out to do battle with the evil anthropomorphic insects known as the Plated Folk.

Not to be confused with Spellslinger.