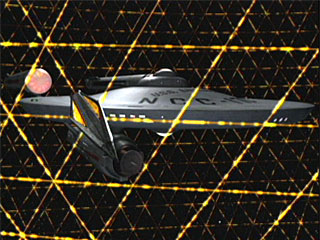 Everyone is staring intently at the view screen. It seems a ship known as the Defiant has gone missing. And it's a good thing everyone was staring so intently at the view screen. Everyone can see the faintly green glowing ship, but it's not picking up on any sensor readings. "Fascinating!" says Spock. Kirk decides Chekov, Bones, Spock and himself will beam over and check it out. But first, a wardrobe change! Everyone beams aboard the Defiant each wearing a chunky-funky Hazmat Suit. It looks like Everybody's Dead, Jim. Seems like the captain of the Defiant was strangled to death by a disgruntled Red Shirt, who is also dead. What's more, this entire ship including the dead crew members are starting to dissolve faster than Denise Crosby's career. And wouldn't you know it? The transporter is on the fritz! Scotty manages to mend it up with bubblegum and Scotch tape but says he can take only three at a time. Kirk bravely insists on being the last to beam aboard. Unfortunately, they can't get a fix on him. As Chekov observes, the "Defiant just wanished"—uh—vanished. And took the captain with her.

Shortly thereafter, aliens called the Tholians demand that the Enterprise get to steppin'. The now in command Spock insists that they will not leave until Kirk is rescued. The Tholians respond by opening fire. Spock, against Bones' suggestion, fires back. Fine, the Tholians decide. You don't want to leave our space? Then you'll just stay here FOREVER! Oh, and did we mention this is a part of space where people tend to go insane?

Chekov and other crew members go Cuckoo for Cocoa Puffs. Kirk is declared dead after attempts to save him have failed. Everyone is going bonkers one by one. Bones is even nastier to Spock than usual. How could things get worse?

Oh yeah, the Tholians are building the eponymous web in space using their jetstreams so they can't leave.