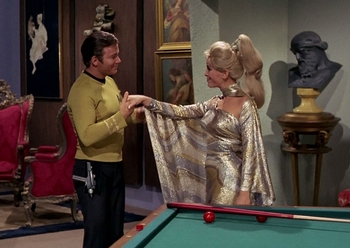 A romance for the ages. Or four hours, anyway.
Advertisement:

Our usual Power Trio beams down to Holberg 917-G in search for ryetalyn, the antidote for the disease ravaging the Enterprise crew. It seems now everyone has trouble sitting still and focusing on...no, wait, that's what they'd need Ritalin for. Sorry. Actually, the disease is Rigellian fever and has already killed three crewmen off screen. (We are to assume they all wore Red Shirts.) It was assumed from previous scans that the planet was uninhabited. However, not only is Spock's tricorder picking up life signs, but they are greeted by a flying robot that resembles a two foot tall metallic Mayor McCheese. They are soon introduced to a man who only gives the name Flint. He brings Kirk and co. to his well appointed home and tells them to help themselves to brandy. No, Brandy is not the name of the blonde bombshell watching them on closed circuit TV (on a very snazzy flatscreen, no less). Her name is Rayna Kapec (Louise Sorel), however, Kirk will indeed help himself to her.

While Bones inspects the promised ryetalyn, finding it to look remarkably like sno cone syrup, Spock inspects the paintings, writings and sheet music in Flint's home. He concludes that these paintings don't just look like the work of Leonardo Da Vinci, they are the work of Leonardo, even though they were made recently. Same with the sheet music: it doesn't just sound like Brahms, it is Brahms. Kirk, meanwhile, inspects Rayna, a young lady that Flint has introduced him to.