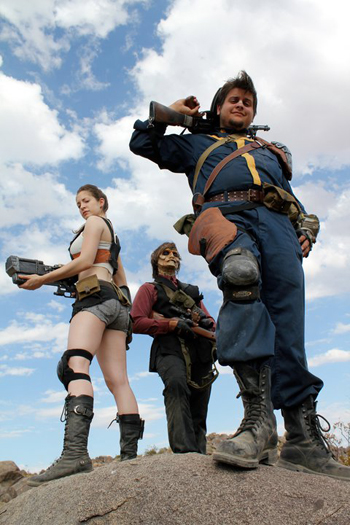 is a Fan Film series set in the Fallout Universe. It's made by Wayside Creations, created and written by Zack Finfrock and cowritten by Brian Clevinger of 8-Bit Theater and Atomic Robo fame. Originally just a short film, positive reaction lead to it being revived as a continuing series.

The series stars Twig, a dimwitted, overweight Vault Dweller; Scarlet, a Laser-Rifle-toting former Legion slave; and Ben, an amoral ghoul. Together, they try to survive the Mojave Wasteland, and, in Twig's case, search for the perfect "Nuka Break".

Complicating matters is a bounty put on the trio by Caesar's Legion for freeing Scar, and Ben's unscrupulous item-obtaining measures have put them in a tight spot where finding work is difficult.

Season 2 was much wider in scope and ambitious, going into production after a very successful

Kickstarter campaign. Tim Cain, one of the founding fathers of the Fallout series, and Chris Avellone, designer for Fallout 2 and New Vegas was involved in the creative process. The second season was released on October 28, 2013. 2017 saw the release of “The Wanderer”, a three-part prequel story focusing on the Ranger.