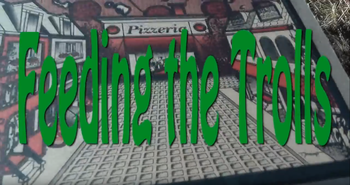 Time to feed the trolls...
Advertisement:

Feeding The Trolls is a web series that started when Noah Yudell, aka CuteFuzzyWeasel

, had a rotten day and decided to, well, feed an internet troll. The video would turn out to be far and away his most popular, and what was originally meant to be a one-off episode has become his signature series, complete with green screen backgrounds, professional lighting, and some pretty dang good comedy to boot. Join CuteFuzzyWeasel as he takes on the best of the internet's worst: the ignorant, the angry, the hateful, and the just plain creepy.

This Series Contains Examples Of

Anyways, if you got a troll you'd like me to feed, list them in the comments below. And as always, have a good day.