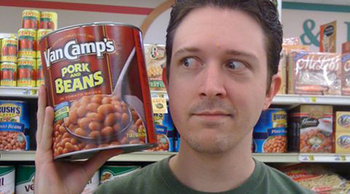 "...[my] favorite comics are the ones where the jokes are on the reader."
Advertisement:

Brian Clevinger (born May 7th, 1978) is an award-winning author of Comic Books and Web Comics, such as 8-Bit Theater, How I Killed Your Master and his longest on-going project, Atomic Robo.

He's also a sadist author. A writer who revels in lying, if it's funnier that way, as the page quote proves. Nuklear Power

is his website, which hosts some of his work; he also sells his work at comic book stores in various countries. He's one of the few webcomic authors to have his talent recognised in the comic book industry; as well as Atomic Robo, he has also contributed writing for Marvel (more specifically, both issues of World War Hulks: Wolverine vs Captain America, as well as the Marvel Adventures revamp of The Infinity Gauntlet). He also does the comic adaptations of Marvel's cartoon series. He is also a co-host on Nerdy Show.

He has written/published the following works: