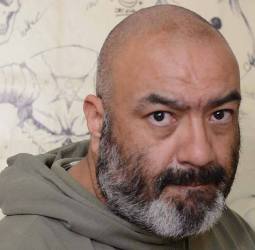 Edgar Clement (born in 1967) is a self taught Mexican comic book artist, illustrator and writer renowned for his eclectic style of graphic narrative that combines fantasy, mythical and Mexican motives, generally in a non conventional layout.

In 1993 he cofounded the magazine El Gallito Ingles (which became Gallito Comics), in 1994 he got the “Young Creators” support scholarship granted by the Fondo Nacional para la Cultura y las Artes (National Fund for Arts and Culture) in the subject of painting, which he used to make his most famous work, Operacion Bolivar, which is the first true Mexican graphic novel. In 1997 he became exponent and guest resident at the Baniff Centre for the Arts in Alberta, Canada, with a residency at Berkeley’s Kala Art Institute. In 1998 together with other Mexican comic book artists founded the collective know as El Taller del Perro (The Dog’s Workplace). In 2001 he was a guest of the Cite des Arts for a residence in Paris and participated as curator and co-organizer of the exposition BD-Mex for the Centre Culturel du Mexique in Paris.In 2007 he published Kerubim Y Otros Cuentos which is a continuation and expansion of Operación Bolivar. As of 2013 he is working in his latest graphic novel, Los Perros Salvajes (The Savage Dogs) which further expands the universe of Operacion Bolivar and Kerubim.