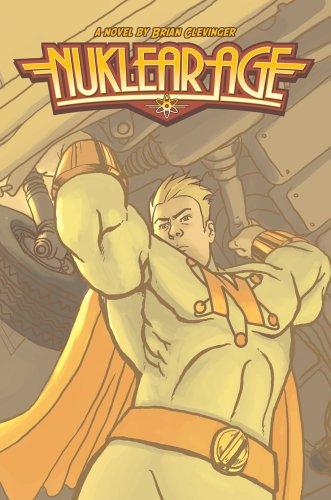 The Man Behind the Mask
A novel by Brian Clevinger, author of 8-Bit Theater. The book is a parody of comic books in general, following a Heroic Comedic Sociopath manchild known as Nuklear Man and his sidekick Atomik Lad, as they fight against the evil Dr. Menace and a host of baddies that crowd the streets. They are joined by the Mighty Metallic Magno Man (Norman), a tungsten superhero that attacks with his "Magnosmash", Angus the Iron Scotsman, a berserk (short) Scottish warrior that attacks with his bagpipe-rocket-powered Dwarf-a-Pult, and Rachel, Atomik Lad's non-powered girlfriend. Notably, they battle Crushtacean, a prehistoric crab formerly frozen in ice that is... attracted to the sounds of Angus's bagpipes, Superion™, a super-powered individual created by Dr. Menace after Nuklear Man is temporarily jailed, and Nihil, whose motivations would have to be spoilered. The writing style undergoes a rather dramatic shift between Superion™ and Nihil, becoming much more serious.
Advertisement:

It's known for having a thoroughly depressing ending, which Clevinger considered the novel's big "joke" (in the sense that a joke subverts your expectations). Knowing just how this would go over, this is one of the few books which contains an apology by the author rather than an epilogue or an afterword.

A sequel called Atomik Age was once announced, which would have followed the adventures of Atomik Lad (now called Atomik) striking out on his own, but Clevinger has since admitted that the project all but died and it will probably never get finished.