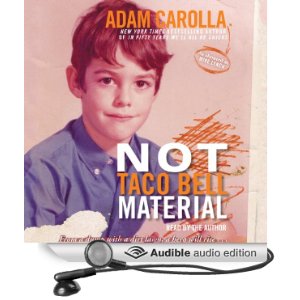 Who Wouln't Hire This Face?
Advertisement:

Not Taco Bell Material is the fourth book written by Adam Carolla in 2012. Similar to his previous book In 50 Years We'll All Be Chicks, this is a collection of essays and humorous observations/stories, but unlike Chicks, it has an overall story narrative, detailing his early years from childhood through his early adult life as a carpenter and construction worker prior to breaking into show business.

Adam describes growing up poor in the North Hollywood area of Los Angeles, California, one of two children born to what's described as lazy and apathetic Hippie Parents. Having little interest in their son's life or activities, he talks about finding outlets in football and other "guy" pursuits, and how at odds it was with their outlook on life (luckily, they were too disinterested in him to put up a fuss about it). After graduating high school, he goes on to work a string of low-paying jobs in carpentry and construction, living in tiny apartments with various girlfriends and his loser friends from high school.

The book title is taken from a part of the book detailing his high school years and how he put in an application to work at Taco Bell, but never heard back from them.