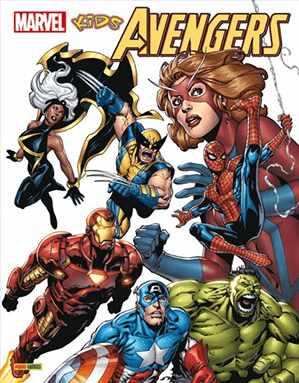 First launched in 2003, Marvel Adventures is a line of Lighter and Softer comics featuring some of the company's top characters and set outside of the 616 canon that most Marvel Comics characters inhabit. Each issue contains a story that's finished by the end of the last page (though setups for larger arcs sometimes occur), and does so in a lighthearted fashion where everything usually gets back to the way it's supposed to be. Likewise, its setting allows it to completely ignore world-changing events from the main comics, such as Civil War.

April 2010 saw the cancellation of practically all the series. The survivors (Spider-Man and Super Heroes) became renumbered, starting again from #1. 'Marvel Adventures' also got dropped from the titles.

However, the spirit of Marvel Adventures lives on in Marvel Action, a joint series published by Marvel and IDW Publishing.