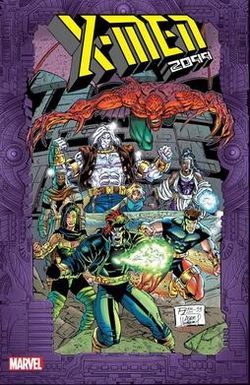 X-Men 2099 is a comic book series published by Marvel Comics from 1993 to 1996 that chronicled the adventures of an X-Men team in the year 2099. It extends the Marvel 2099 imprint, which features other future versions of popular Marvel characters, such as Spider-Man 2099 and Hulk 2099. The series was written by John Francis Moore and largely pencilled by Ron Lim.

The X-Men 2099 series of mutants from the future Earth-928 who take on Professor Charles Xavier's dream to unite the mutants of the world. They are founded by Desert Ghost who finds and gathers the mutants to become the new incarnation of the X-Men.