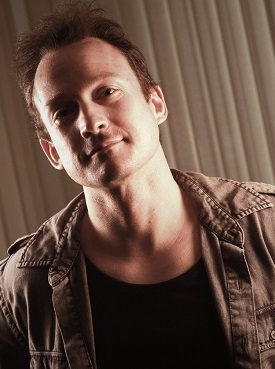 "... if you give the player the ability to create a certain type of character, make sure that you honor the player's character build. What I mean by that is, if you give a character to option to dump 500 points into speech, make sure that they have an experience that's very cool and is appropriate for a speech based character. The same thing is true if you're a stupid combat monster; if you're a sneaky thief who no one ever sees... If you're allowing the players to build a character like that with the rule set, then make sure your content supports that experience."
— Interview with Duckfeed.tv

Chris Avellone (born September 27, 1972) is an American video game designer and writer, who started out with Interplay Entertainment, working on such titles as Fallout 2, Planescape: Torment and the Icewind Dale series. He left Interplay after the cancellation of Fallout: Van Buren and headed over to Obsidian Entertainment. His first work there was Knights of the Old Republic II: The Sith Lords, followed by Neverwinter Nights 2 and action RPG Alpha Protocol. He then returned to the Fallout series with Fallout: New Vegas, for which he is a senior designer and was heavily involved in the development of the DLC campaigns. He also starred in Season 2 of the fan project called Fallout: Nuka Break, which contained numerous nods to the original two Fallouts.

He has then gone on to be involved in a number of Kickstarter games (even styling himself as a "professional stretch-goal"), including Obsidian's Pillars of Eternity, inXile Entertainment's Wasteland 2 and Torment: Tides of Numenera and even became "special guest writer" for FTL: Faster Than Light: Advanced Edition. He left Obsidian in June 2015 to work as a freelance game writer, due to radical disagreements with the higher-ups at the company.

The next project he worked on was Divinity: Original Sin II. He would later return to the industry, working on Prey (2017). His writing also appears in Into the Breach.

In June 2020, Avellone was faced with several allegations of sexual harassment and assault, which caused quite a few of the game studios who had employed him as a freelance writer to officially distance themselves from him and even remove his writing from the projects he had been involved with. After a year of silence, Avellone posted a response

denying all accusations made against him, explaining the background that led to the accusations and stating that he had filed a libel lawsuit against the accusers.

Avellone is noted for subverting trends in RPGs that he often finds particularly infuriating. In Planescape: Torment, he took his dislike of the Goomba tendencies of rats and utilized cranium rats, which are troublesome when encountered in large numbers. In Knights of the Old Republic II: The Sith Lords, he took his dislike of the way that the Force is often portrayed and used it to create a character that sought, for better or worse, to kill the Force entirely. He is also noted for making established game mechanics part of the story. In KotOR2, your player character was described as being able to gain power through the Force by killing others, involving the Experience Points system directly in the story. In Planescape: Torment, the Nameless One's immortality made death not a liability, but an advantage, allowing the player to circumvent some death traps by simply dying, and reviving later once they had been removed from the death trap. He is also known for having a very extreme aversion to traditional romances, preferring ones that are somewhat tragic or unrequited.