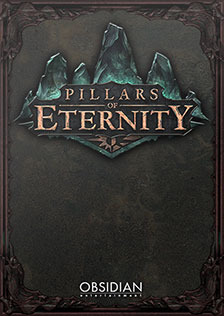 No sleep for the watcher...
Advertisement:

Pillars of Eternity is a computer roleplaying game by Obsidian Entertainment, released on March 26, 2015. Intended as a Spiritual Successor to Baldur's Gate, Planescape: Torment and Icewind Dale, the game was funded in October 2012 through the crowdfunding website Kickstarter, where it was pitched as Project Eternity. Meeting its initial funding goal of $1.1 million in 27 hours, it went on to break the site's funding record at the time (set by Broken Age), pulling in just shy of $4 million. Including PayPal donations, the gross total budget of the game was roughly $4.3 million dollars. Paradox Interactive signed a distribution agreement with Obsidian Entertainment to market and sell the game to the general gaming public.

The world of Eora is one of souls. Souls are not mere metaphysical abstractions; they are quantifiable, measurable objects, and their discovery has had vast implications for society, leading to the founding of a whole new field of science know as "Animancy". The world may be about to enter a golden age as a result, but the rapid advances in technology and society occurring mark the era as a time of turmoil and conflict.

No other place is this conflict felt stronger than in the former colony of Dyrwood, whose people are ravaged by a strange and horrifying affliction, where the vast majority of newborn children enter the world without a soul, leaving them physically alive but in a completely catatonic and vegetative state, unable to do anything but stare blankly into nothingness. This strange phenomenon, known as "Waidwen's Legacy", or by the less poetic (though no less foreboding) name "the Hollowborn Plague", has attracted the attention of animancers from all over the world hoping to prove the usefulness of their trade by finding the cause for the affliction as well as a cure. But many of the bereaved family members, meanwhile, blame Animancy for the plague, believing that it is a punishment from the gods on the mortal civilisations for arrogantly trying to meddle in the realm of souls.

But currently, all of that is not of much concern to the Player Character, a foreigner who has arrived with a group of other immigrants to the Dyrwood, lured by promises of cheap land to settle and cultivate. But no sooner than their caravan has crossed the border, before everything begins to go horribly wrong; the travelling company is hit by by a magical storm that kills everyone but them, as they manage to just barely seek refuge in a nearby ancient ruin. Here they witness a cult performing a ritual, where the cult members activate a mysterious machine by sacrificing their souls to it. Upon being activated, the machine unleashes a field of energy, that awakens something in the player character upon their exposure to it, imbuing them with the power of a Watcher; a person who can peer into people souls and read their memories. Unfortunately, that is not the only thing that is awakened in the newly-minted Watcher by the event, as they also find themselves haunted day and night by disturbing and traumatic visions, seemingly from another place and another time, robbing them of their ability to sleep calmly and quickly becoming a serious threat to their sanity, leaving them with no choice by to follow the clues offered by these visions in a hope to find some way to reverse the curse before it is too late. As the Watcher searches for answers, it become increasingly evident that the Hollowborn Plague might play a bigger role in whatever they have gotten themselves messed up in...

In the wake of the game's success, Obsidian has announced that they are working on a number of things to expand the new franchise: a traditional Expansion Pack (The White March), a sequel, a Collectible Card Game (Lords of the Eastern Reach), and a Tabletop Game.

for the Collectible Card Game, Pillars of Eternity: Lords of the Eastern Reach, was started. The game was released in February 2016.

The first part of The White March expansion was released on August 25, 2015, and Part 2 released on February 16, 2016. In January 2017, Pillars of Eternity II: Deadfire started funding on Fig. Taking place in the Deadfire Archipelago, the game once again stars the Watcher, who must now track down the god Eothas after he inhabits a stone statue and destroys Caed Nua, nearly killing you in the process. The sequel was released on May 8, 2018.

Ports for the PlayStation 4 and Xbox One were announced in June 2017, and released on August 29th. A port for the Nintendo Switch was released August 8th, 2019.

In 2020, Avowed, a first person action RPG set in the world of Pillars of Eternity was announced.

Pillars of Eternity provides examples of the following tropes: