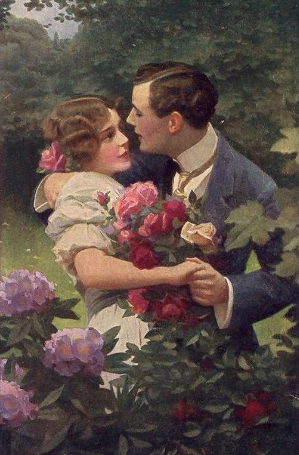 The garden of love is green without limit
and yields many fruits other than sorrow or joy.
Love is beyond either condition:
without spring, without autumn, it is always fresh.
— Rumi, Masnavi I
Advertisement:

From Hebrew scripture and Persian poetry to the English classics, gardens have been a timeless setting for romance to bloom and lovers to meet.

Historically, public gardens were a shared space. As a popular destination for social outings, relaxation, and the enjoyment of nature, they provided the perfect occasion for chance encounters between potential lovers. Likewise, private gardens were host to social gatherings where friends and distant acquaintances could reconnect and grow closer. As a communal space, gardens are a useful location for the cultivation of cross-gender relationships, where interactions between men and women were more limited and scrutinized than they are today.

Encircled by natural splendor and filled with the fragrance of flowers, a garden is an ideal setting for love to take root, grow, and blossom. One seeking beauty in nature might just find beauty in other places. Gardens often provide a degree of privacy, making them a perfect location for secret meetings or forbidden affairs. Secluded groves and hidden enclaves offer a refuge for lovers away from prying eyes of potential onlookers.

The garden and its fruits also hold metaphorical significance. They can symbolize fertility, creation, desire, the blossoming of new life, and may hearken to an earthly paradise or a reflection of Eden. The garden may be used as an allegorical setting, usually representing love itself, the beloved, or (in religious and spiritual works) God's love for humanity.

Sometimes, the state of a garden is used to illuminate a character's inner nature. A well-tended garden indicates virtues such as diligence, devotion, and a love of beauty, qualities that can endear a potential lover to their beloved. It's also an ideal place to pick up and give Flowers of Romance to their loved ones. Depending on the type of flower or romance, this can lead to Queer Flowers.