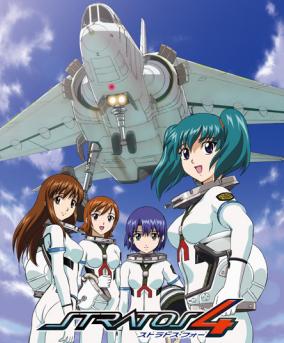 Fifty years before the start of the series, scientists learned that a group of comets would enter the Solar System on a collision course with Earth. The United Countries set up a two-tiered global defense system against the threat: the primary one being the space-based Comet Blasters, who ride out on spaceships and deploy special missiles that vaporize most of each comet, and the secondary one being the ground-based Meteor Sweepers, who ride up on high-altitude airplanes to blast what's left of the comet to bits.

Most of the series takes place on an airbase on Shimoji Island (a.k.a. Shimojishima or Shimojijima) in 2024, where Mikaze Honjou and three friends are Meteor Sweepers, and trainees to become Comet Blasters. Mikaze, despite coming from a family of aircraft pilots, initially feels kinda down about training and going to space, despite her original enthusiasm for the program. But she's soon convinced to be the high achiever, leading her team into a strange web of conspiracies and secrets...

It's strongly recommended that you watch more than just the first season, due to the fact that the plot really doesn't end with it.

Stratos 4 is an anime series produced by Studio Fantasia, and directed by Takeshi Mori (who also did Vandread). Theme songs were written/performed by Melocure, except for the last one which is only by Megumi Hinata (as Melocure's other member had passed away). Not related to Infinite Stratos or the character Lockon Stratos.

Now with a Character Sheet in the making! Feel free to contribute!