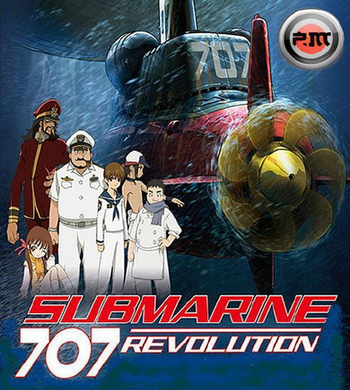 Submarine 707R is a manga released between 1963-1965 by Satoru Ozawa. It was later adapted into a two episode OVA in 2003 (and sadly nobody has continued the story).
Advertisement:

In the near future, in response to a series of attacks on ships and ports by an organization known as the USR (Undersea/Underwater Silence Revolution), eleven nations of the world have formed the PKN (Peace Keeping Navy). At the inaugural meeting, the USR commander Admiral Red launches an attack with his advanced submarine, the U-X. When the flagship is in danger of being sunk, the Japanese contribution to the navy, Submarine 707, which arrived late, steers into the path of the torpedoes and is sunk. Six months later, a new 707 and its crew set out to sea to fight Admiral Red.