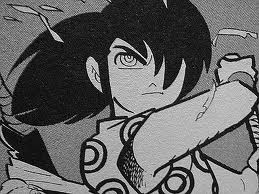 Kamui, the main character...kind of.
Advertisement:

Kamui-den was the very first entry in Shirato Sampei's long-running series of manga set in 17th century Japan. Though ostensibly the story of the low-born ninja Kamui, it presents its setting in broad terms, depicting characters of various social backgrounds and the challenges they face. The first series also included a heady dose of Marxist ideology which was present to a lesser extent (or simply not included) in later iterations. This leads to some confusion about the relation of the first series with later ones, such as the better known spin-off/sequel Kamui Gaiden. First appearing in the underground magazine Garo in 1964, Kamui-den is also a good example of the Gekiga style of manga devised by Tatsumi Yoshihiro in the late 50s. Oh, and the original series has never been translated into English.

Anyone coming to the series for the first time will want to distinguish between the various iterations of the Kamui property and their chronological relation to each other: