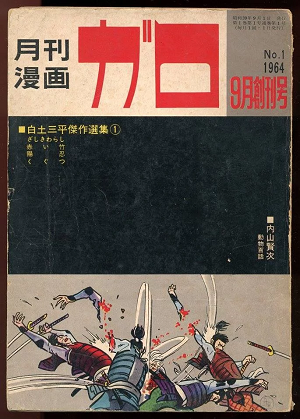 Gekiga is a style of alternative Manga started in the early 1950s. The style was largely pioneered by Yoshihiro Tatsumi, who eventually coined the term to further differentiate it from the other comics of the day.
Advertisement:

"Manga" means "humorous pictures"; "gekiga" was designed as a parallel word meaning "dramatic pictures", reflecting the fact that gekiga was intended for older readers (manga at the time was aimed almost exclusively at pre-teens) and was much more serious than the other Japanese comics of the day. The drawing style and the stories had a stark realism to them and often depicted the struggles of the everyday man in Japan.

Eventually the style and its growing influence among Mangaka lead to Osamu Tezuka writing in the style as well. Many of Tezuka's works near the end of his career are Gekiga or influenced by it such as Phoenix and Adolf. Tezuka embracing the style led to an even stronger boom in the realm of experimental comics.

Eventually the influence of gekiga began to fade as Japanese comics became more and more commercialized; mainstream comics for adult readers eventually developed into Seinen. Currently the term refers to modern alternative manga, as well as the 60's and 70's originals.