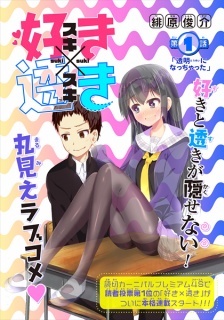 Touka Aizuki would love nothing more than to be able to speak properly to her crush, Ryoutarou Mimori, the childhood friend from which she drifted apart. The problem is that every time she tries she tenses up and acts like a jerk to him. After a day of failed attempts to converse with him properly, she goes to bed wishing she could just disappear. The next morning, she realizes she's done just that and become invisible and inaudible to everyone around her. After the initial shock wears off, Touka begins gleefully exploiting the opportunities this gives her, which includes hovering as close as she wants to Ryoutarou with him none the wiser.

What Touka does not know is that there is, in fact, one person who can see through her invisibility: Ryoutarou. The only thing preventing him from revealing this fact is the knowledge that Touka would be horrifically embarrassed to learn he could see everything she did. This leaves Ryoutarou in the unenviable position of having to ignore Touka's invisibility while she's doing everything she can to get right in his face.

This is Suki x Suki (好きｘ透き) by Shunsuke Hibaru. The tale of an invisible girl oblivious to the fact that she can only be seen by the one she loves most.