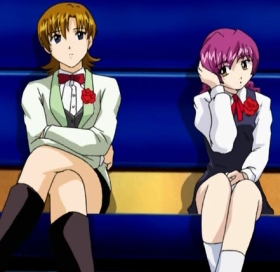 Najica & Lila.
An extraordinary scent and the fragrance of destiny. Najica Hiiragi, special agent for a secret organization, receives her mission assignments along with a single rose. Glorious missions more lovely than a bullet and more dangerous than love itself; these are what make up Najica Blitz Tactics.
— The Opening Narration.
Advertisement:

Najica Blitz Tactics is a 2001 anime series produced by Studio Fantasia. Directed by Katsuhiko Nishijima, it is first and foremost a Panty Shot parade, in which no opportunity is spared to show women's undergarments; this also means that no woman wears any pants ever and miniskirts are considered appropriate mission attire. But at the same time, Najica is an entertaining James Bond-style action show with a surprisingly deep storyline.

Najica Hiiragi works as a perfume creator by day, undercover agent by night. Her ability to solve any case, how hard it may be, has garnered her a lot of respect within the underground agency she works for. The fact that she has a very distinguishing sense of smell also is of great help.

Najica's latest assignment is to rescue a kidnapped girl, Lila, who turns out to be Humaritt ZZZ.note A Humaritt is a highly advanced android. After the mission, Najica is assigned to be Lila's master and to bring her along on future missions, a task which she grudgingly accepts. Lila not only turns out to be a very formidable partner during her missions, but Najica gradually warms up to her personally as well.

A three-volume manga cuts the panty shot amount by about 90%, as it's quite more action-oriented, ignoring Najica's Character Development in the process.