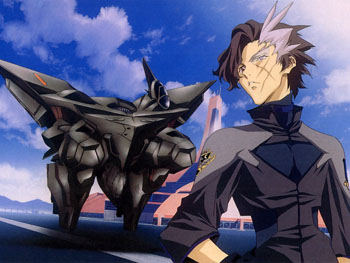 In an effort to learn more about metallic aliens that have been plaguing the planet for the past years, Dr. Noguchi and assistant Maki Agata try to bring to life a construct pieced together from various destroyed aliens. They recruit Takuto Kaneshiro, Maki's boyfriend at the college they both attend, into the project because of his talent for metallurgy. While Takuto is unhappy with Maki keeping secrets from him again, he reluctantly helps with the project — but in the process of reviving the monster that Noguchi has aptly called Frank (short for Frankenstein), unidentified soldiers invade the facility known as MORGUE. The soldiers cut the power, which leads to a power surge that violently brings Frank to life and causes an explosion which kills everyone in the facility — except Takuto.
Advertisement:

"Mr. X" visits the scarred (emotionally and physically) Takuto in the hospital and offers him a chance to get his vengeance on the monster he blames for killing Maki and destroying his life. Months later, Lt. Ryu Soma is born from the ashes of Takuto's soul; he re-enters life as a military pilot for the organization known as FUNERAL, which deals with the attacking aliens (and has also recaptured Frank, who escaped after the explosion at MORGUE). It quickly becomes clear that Frank has become the best weapon FUNERAL has to defend against the aliens, which leaves Ryu torn between getting revenge for the woman he loved and protecting his newfound comrades.

Further complicating the picture is a young girl named Hattie; besides being the only person who can communicate with Frank, she also bears a striking resemblance to Maki. As it becomes apparent that Frank is more than a simple monster, Ryu and his FUNERAL comrades have to come to terms with questions of human identity, grief, and loss.

Argento Soma originally aired on TV Tokyo with 25 episodes from 2000 to 2001, and was followed by the OVA "Alone and By Myself".

Argento Soma has examples of: