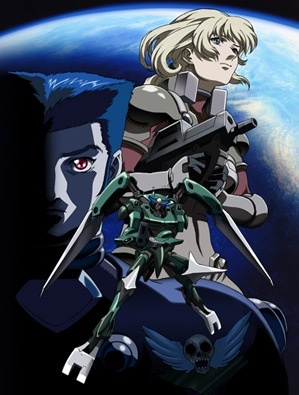 Yuji Kaido was an ordinary young man with a normal lifestyle, but after being diagnosed with a strange and terminal illness, doctors suggested that he and other similar individuals be frozen and awakened after a proper cure for the disease has been found. This was in 2009. Flash to the year 2031, Yuji awakes to a world that has been completely taken over by a giant insect-like species known as the Blue. Yuji is only saved from certain death by the beautiful but cold soldier, Marlene Angel. Together, both characters must find a way to survive onslaught after onslaught of the Blue and make it back to a space station called Second Earth, where Yuji must discover the true nature of his condition. Along the way, Yuji and Marlene form a bond with one another, one that starts off as hostile but gradually evolves into trust, friendliness and, ultimately, love.

In many ways it is a Fish out of Water plot, but without the humor as Yuji wakes up to a world completely different and is at first unable to cope with a world in which the Blue have taken over. He does quickly learn to fend for himself, but is still shocked by how the ethics, morality, values, and general outlook on life have changed so radically since his time. For example, sex is meaningless pleasure, and there's no point in forming close meaningful bonds because Anyone Can Die at any moment. There is no longer any value placed on human life as every individual human is considered expendable. At the same time, it is one of the greatest stories of Character Development ever, as Marlene, who begins the series as an emotionless soldier, slowly regains her humanity and empathy that the Blue and Second Earth has robbed her of.

The premise is similar to that of Starship Troopers but without the campy satirical feel of the film or the controversial political ideology of the novel. Adult Swim even described this show as Starship Troopers meets Futurama. See also Earth Maiden Arjuna for a similar series, but in the Magical Girl Warrior genre.