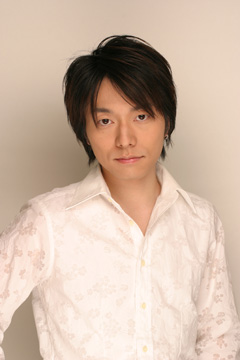 Kenji Nojima is a Japanese seiyuu born March 16, 1976. Hirofumi Nojima is his brother, and Akio Nojima is his father. His oldest son, Touya, also became a voice actor in 2020.
Advertisement:

Kenji-san is one of the people involved in one of those seiyu marriages, this time, to Chie Sawaguchi of Boys Be... fame, meaning it's really the Family Business for him.

Not to be confused with Kenji Nomura. Meaning, no, Nojima does not have a-GIGANTIC TAGER!.

But he may instead have a-LANDMASTER~!!!! A giant futuristic tank drops down in the sky