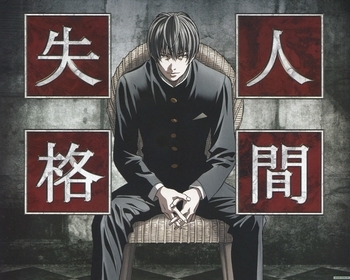 The essence of a masterpiece is "blue".
Advertisement:

Blue Literature (Aoi Bungaku) is an anthology anime produced by Madhouse in 2009 featuring adaptations of six classic Japanese works of literature then-recently reprinted under the Blue Literature Series label, and is similar to Ayakashi: Samurai Horror Tales in that each story uses a different team and art style. These works are:

Incidentally, the last two stories take place in the same setting (or are at least adapted as such), although the only common character is the nation's emperor.

Oh, and like we said earlier, these are old (and long ago translated) stories, so only the bits this anime added, namely Kokoro's "Winter" episode and "Run, Melos!"'s Framing Device, will be spoiler-tagged.

This series as a whole exhibits the following tropes:

open/close all folders
No Longer Human
In the Woods Beneath the Cherry Blossoms in Full Bloom
Kokoro
Run, Melos!
The Spider's Thread
Hell Screen