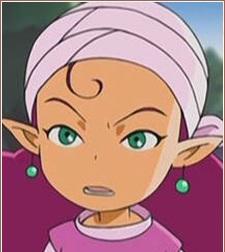 Girl Not Appearing In The Gamenote Nina.
Advertisement:

Maple Story (メイプルストーリー Meipuru Sutōrī) is an anime based on the video game franchise by the same name.

It follows the adventure of a boy named Al, and his monster friends Nina (magic-user), Gallus (stone golem), and Barrow (a Master Archer). The story revolves around a legendary tree whose seeds have fallen in a battle years ago, causing a division between monsters and humans.