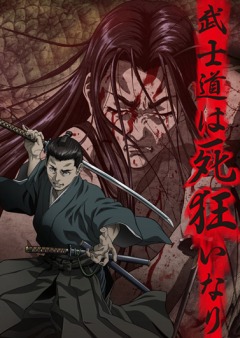 As everything in this world is but a sham, death is the only sincerity.
— Poem quoted in The Hagakure
Advertisement:

Shigurui (シグルイ, "death frenzy") is a Jidaigeki martial arts drama manga based on part of Nanjou Norio's historical novel Suruga-Jō Gozen Jiai (mainly the first chapter); the manga itself is illustrated and co-written by Yamuguchi Takayuki. In 2007, Madhouse made a 12-episode anime directed by Hiroshi Hamasaki and written by Seishi Minakami.

The story begins at a deadly tournament with real swords ordered by the sadistic daimyo Tokugawa Tadanaga in 1629, a secret account of which records only six survivors out of twenty-two contestants. Our main characters are the one-armed samurai Fujiki Gennosuke and the blind samurai Irako Seigen, two Arch-Enemies brought together by fate for one final Duel to the Death. Both samurai are accompanied by women: Irako is led by a woman named Iku, and Fujiki is aided by a young woman named Iwamoto Mie who seems to bear a grudge against Irako. At the moment the match begins, the narrative jumps back in time to show How We Got Here: it tells the story of the two samurai who once belonged to the same school of swordsmanship and how they got to this point, both maimed and determined to kill each other.

The artwork is incredible. Yamaguchi has a talent for visualizing human anatomy and likes to show it by giving us X-ray views of what the muscles, bones, nervous system, or organs of a particular person are doing in the midst of a fight or strenuous activity. The gore is almost overwhelming; he devotes exactly as much attention to the guts when they're outside as when they're inside, and for all the beauty of its techniques, swordsmanship is depicted as an art of butchery.

The plot and imagery create a powerful juxtaposition of beauty and brutality, which makes for a searing indictment of Tokugawa society and the inhumanity required by the code of the samurai. Graphic depictions of nudity, sex, violence, and gore make this a definite adults-only read.

Watch Out for Spoilers! You probably don't want to browse these pages until you've read the manga!