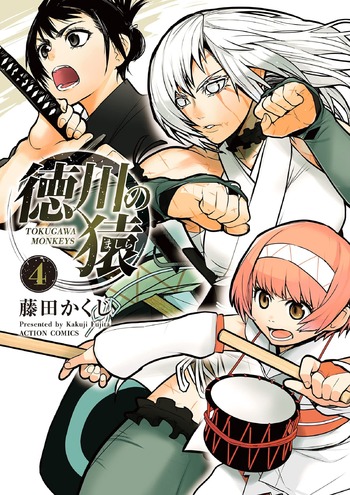 Tokugawa no Saru is a manga by Kakuji Fujita serialised in Monthly Action.
Advertisement:

It's set in Japan after the turn of the 20th century (presumably). The protagonist is a swordsman named Kaneno Suzunosuke who comes to Edo to avenge her father's death by the 'headless man'. There she meets a pair of street performers, the scarred, deafblind, and mute Tsuki and the diminutive Inuchiyo who acts as the former's interpreter. Suzu quickly discovers that despite Tsuki's disabilities, she's a fierce fighter.

The main antagonists are a group of criminals called the Tengu, who wear said mythical creature's face as masks.

Tropes in Tokugawa no Saru: