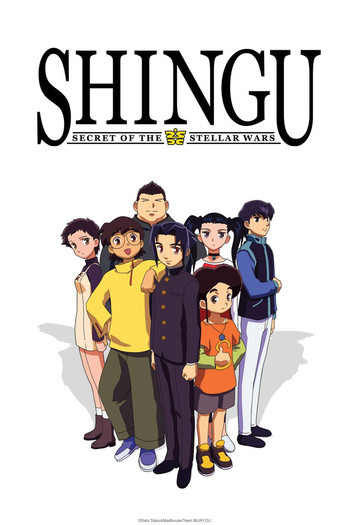 Just your regular middle-school anime.
Shingu: Secret of the Stellar Wars is a science fiction anime produced by Madhouse under director Tatsuo Sato, aired on the NHK network. The series consists of 26 episodes released between May 8th, 2001 and December 4th, 2001. On March 3, 2008, the series made its North American television debut on the Funimation Channel.
Advertisement:

The premise revolves around an alien invasion of Tokyo being repelled by a mysterious giant being which is almost a monster in itself. The attack and giant creature are witnessed by many of those at a highschool. Shortly after, highschool student Murata Hajime witnesses fellow classmates using psychic abilities and is drawn into the mysteries of the apparent psychic powers and the alien attack.