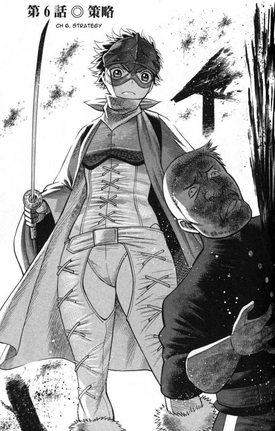 After the Meiji Revolution in Japan, a northern fishing town of Hakodate becomes central to an ongoing struggle between monsters called the Youjin that have made their nests there, and a young warrior called Miburo. Miburo is in fact the last surviving daughter of Hijikata Toushizou, Hijikata Hyou, who was given the task of eliminating every last Youjin as her father's last wish. The Youjin, however, have the backing of the world powers, whose representatives have been sent to Hakodate to secure the "Seal of the Shinsengumi," which is, as Hijikata Toushizou describes, "is the lid on the pot of hell." One night, while Hyou is out slaying Youjin, she gets help from a beautiful and mysterious figure who only calls herself "Himegami,". Unbeknownst to Hyou, Himegami is in fact the girl she saved earlier, Himeka.

Hakodate Youjin Buraichou Himegami (aka Tales of the Hakodate Youjin Outlaws: Himegami) is a five volume manga written and drawn by Tamaki Nozomu (who also did Dance in the Vampire Bund). While not terribly popular, it is a very good yuri action series that is worth the read (and price if it ever comes across the pond).

Not work safe, just as a heads up.