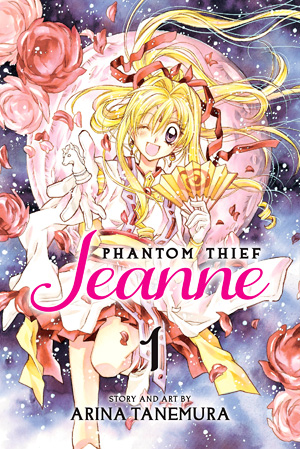 Phantom Thief Jeanne (known as Kamikaze Kaitou Jeanne in its native country) is a Magical Girl manga by Arina Tanemura, published in the Shoujo magazine Ribon from 1998 to 2000. It was adapted into a 44 episode anime by Toei Animation in 1999. It sets itself apart from most Magical Girl series by having a Broken Bird heroine, and being quite a Tear Jerker at times. The manga was originally licensed in English by CMX, but it was later picked up by Viz Media after CMX's closure.

Maron Kusakabe may seem to be an Ordinary High-School Student, but secretly she's the reincarnation of Joan of Arc, Phantom Thief Jeanne! Maron is on a Mission from God to seal demons hiding in works of art, which possess and corrupt pure-hearted people who admire their beauty. Unfortunately, sealing the demon also causes the artwork it inhabits to disappear, making Jeanne seem to be nothing more than a petty thief to most. The police and Maron's best friend Miyako, who dreams of becoming a detective, are dedicated to catching her, but Jeanne has God's blessing and a number of divine tools at her disposal.

Because her divorced parents live and work overseas, Maron lives alone in her apartment with tiny angel Finn Fish. Across the hall live Miyako and her family, unaware of Maron's identity. One day, Chivalrous Pervert Chiaki Nagoya moves in next door. He gets on Maron's nerves, but Miyako instantly falls head-over-heels in love with him. Soon after, Phantom Thief Sinbad appears on the scene and starts competing with Jeanne to see who can seal the demons first. Finn and Maron wonder who he could be, as Maron was supposed to be the only phantom thief. They soon conclude that Sinbad must be Jeanne's opposite – a phantom thief working for the devil.