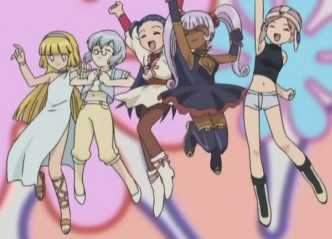 From Studio Gainax, based on their Princess Maker video game series, comes this sweet and hilarious Shoujo story: A retired knight named Gunbard finds a baby girl in an abandoned battlefield and adopts her. As time passes, it becomes apparent that Yucie can't physically grow past the age of 10, the reason being a mystery.

One day, a light from the royal castle calls upon her. Sneaking in the highest tower, Yucie finds the thing that spoke: The Eternal Tiara, an artifact so powerful it can grant any wish. The Queen arrives and warns Yucie that the Tiara can only be used by someone the jewel chooses, and that using it now could kill her.

Yucie enrolls in a 'princess school' regimented by Queen Ercell in order to make herself worthy of the Tiara so she can wish her curse away. Soon more characters appear. More girls with the same curse as her... and without as many qualms about getting the prize as her.

Let's face it: we've ALL been there on our birthday.

Let's face it: we've ALL been there on our birthday.