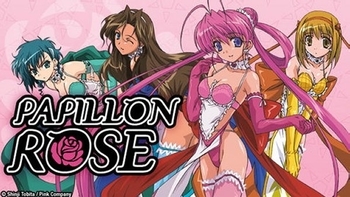 Lingerie Soldier Papillon Rose is an ecchi parody of the Magical Girl genre, particularly of Sailor Moon whose plot it borrows from heavily. Papillon Rose started out as a web original, getting a brief OVA in 2003 and a 6-episode broadcast sequel called Papillon Rose: New Season in 2006.