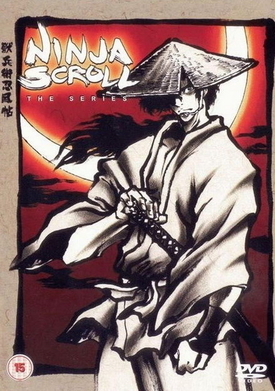 Thirteen episode anime series that can be considered either a Spiritual Successor or a direct sequel to the Ninja Scroll movie. It revolves around Jubei needing to transport a mystical artifact called the Dragon Stone to a "Priestess of Light", and then to protect both of them from the machinations of the Hiruko Clan and the Kimon Shu. Dakuan re-emerges as one of Jubei's allies, and each episode features no fewer than three ninjas (from one or both rival ninja clans) with a wide variety of bizarre superpowers that match the wide variety of powers displayed by the Eight Devils of Kimon in the original movie (which Jubei tends to cut down rather handily, when they aren't busy killing each other).

From a pure action standpoint it's generally a worthy sequel to the original movie, though there's not quite as much character development, and its tone shifts from historical fantasy to a more futuristic feel. Also, it leans on Futaro Yamada's The Kouga Ninja Scrolls even more than the movie.