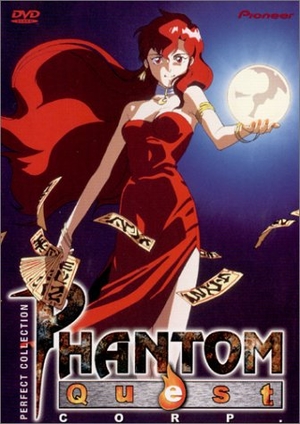 Phantom Quest Corp. (Yuugen Kaisha) is a four-episode comedy/horror/mystery OVA from Madhouse, which was licensed for release by Geneon in mid-1994. The english dub was released early the following year in two VHS volumes. In December of '98, it was given a re-release on DVD, in Japan, while the english version arrived in November of 2000.

The series follows the exploits of Phantom Quest, a detective agency lead by Ayaka Kisaragi. They take on assignments dealing with the occult and battle all manner of evil spirit across Tokyo. Their cases are often commissioned to them by U Division's Detective Karino, both to lighten his workload and as a personal favor to Ayaka.

Rather than an overarching narrative, it's more of a sitcom with each episode being its own self-contained adventure which follows a case-by-case format. However, some of the spooks they meet aren't bad, such as an anemic vampire who runs a tea shop, or a ghost who helps out with his girlfriend's museum exhibit.

But the real opposition the company faces is the constant onset of debt, thanks to the damage claims that're constantly filed against them, usually because of their president. Along with her excessive spending habits.

The series has often been compared to Ghost Sweeper Mikami, due to the similarities in its premise and having been released at roughly the same time (for the record, Ghost Sweeper Mikami debuted a year earlier in April of '93). So if you've seen either one and enjoyed it, you may wanna give the other a try.