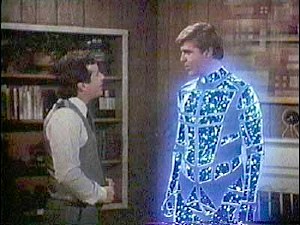 Automan was a short-lived cop show that aired on ABC in The '80s. Desi Arnaz Jr. played Walter Nebicher, a police scientist/Hollywood Nerd who's stuck in the computer room when he'd rather be out on the street. In response, he creates Automan (short for "Automatic Man", played by Chuck Wagner), an artificially intelligent holographic partner. Automan had the ability to do any action he’s seen on video, and interface with any computer system. He was also aided by Cursor, a blinking ball of light who could become virtually any object Automan needed, such as various vehicles or civilian clothing.

Naturally, They Fight Crime!. Twelve episodes of the series aired in 1983-84.