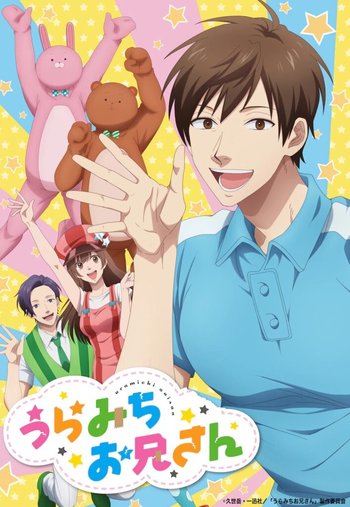 Hey there, wonderful boys and girls! Gooood morning! It's 8:00 AM, and you know what that means!

That's right! Time for another fun filled episode of Together with Maman, with your favorite Singing Instructors Utano and Iketeru, and Exercise Instructor Uramichi! Get ready for learning the joys of fighting evil germs, funny sing-alongs, and Uramichi's famous existential crises!

...Don't worry, that last part won't make it in the final cut.

The truth is, like many good adults, our instructors and actors get stressed sometimes. They're not always ready to take on the day, much less to perform at their best in front of the kids. And no one knows that feeling better than Omota Uramichi, a failed gymnast who at his 31 years of life is on the brink of snapping. He drinks, smokes, and takes his frustrations out on his ever suffering juniors along with balancing his stressful children's television job. Thankfully (for us, not for him), he's not the only one suffering through the motions. There's Tobikichi Usahara and Mitsuo Kumatani, Uramichi's long-suffering former college underclassmen turned suit actors, and Iketeru Daga and Utano Tadano, music industry has-beens eking out a living in the show.

Life Lessons with Uramichi-oniisan (うらみちお兄さん, "Uramichi-oniisan") began as a Pixiv comic series written and illustrated by Kuze Gaku before being serialized in Ichijinsha's digital magazine Comic POOL starting in 2017. A few voice commercials were put out to promote volume releases, followed with an anime adaptation, directed by Nobuyoshi Nagayama for Studio Blanc, which started airing in July 6, 2021, with the aforementioned videos' voice cast reprising their roles. Kodansha Comics USA announced an English localization of the manga in 2019, released in onmibus format.

Uramichi remembers that his back hurts due to messing up a routine in his gymnast. Remembering it and being asked to lift the grandson of the MHK Station Chief brings pain to Uramichi.

Uramichi remembers that his back hurts due to messing up a routine in his gymnast. Remembering it and being asked to lift the grandson of the MHK Station Chief brings pain to Uramichi.