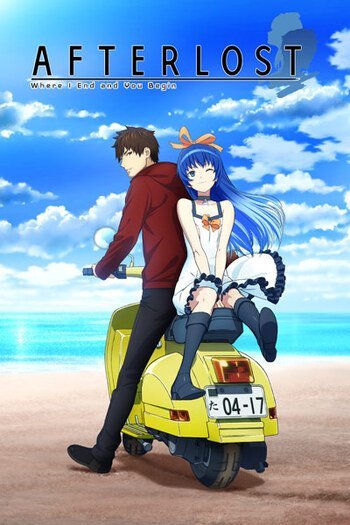 Afterlost (Japanese: 消滅都市, Hepburn: Shōmetsu Toshi, transl. "Annihilated City") (stylized as AFTERLOST) is a Japanese mobile game series with 4 announced games. The first game centers around Yuki, who is said to be the Sole Survivor from a cataclysmic event in her hometown Tokyo — renamed Lost after the event — and the smuggler Takuya as they attempt to get Yuki out of captivity and back to Lost after she receives a message from her father.

An 12 episode anime adaptation was announced in May 2018 and then aired from April 7 to June 23 in 2019 on five Japanese TV channelsnote Tokyo MX, ytv, BS11, and AT-X with a simuldub by Funimation premiering on April 28th the same year. The series was animated by Madhouse, directed by Shigeyuki Miya, and written by Shingo Irie. Tomoyuki Shitaya designed the characters, while Satoshi Motoyama served as the series' sound director. Kenji Kawai composed the series' music, which was produced by Pony Canyon. Mao Abe performed the series' opening theme song "Kotae". For the ending theme, Kana Hanazawa performed a cover of "Swallowtail Butterfly ～Ai no Uta～" by Chara for the first two episodes and a cover of "Hello, Again ～Mukashi Kara Aru Basho～" by My Little Lover in episodes 8 and 12, while SPR5 performed "With Your Breath" from episodes 3–7, then episodes 9-11.