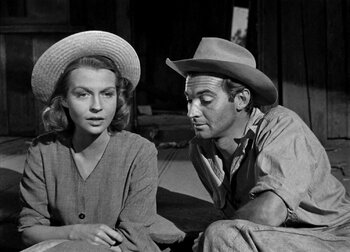 The Southerner is a 1945 drama film written and directed by Jean Renoir, adapted from the 1941 novel Autumn in Your Hand by George Sessions Perry.

It's a story about a year in the life of the Tucker clan. As the film begins they are poor laborers picking cotton in Texas. In the middle of the day, in the heat, Uncle Pete collapses in the middle of the field and dies. His dying words to family patriarch Sam Tucker (Zachary Scott) are "Work for yourself. Grow your own crops."

Sam takes this to heart. He works out a deal to be a tenant farmer on an undeveloped bit of his landlord's property. The whole Tucker family—Sam, his wife Nona (Betty Field), their children Daisy and Jot, and "Granny" (Beulah Bondi), Sam's cranky, endlessly complaining mother—take up residence in a tumbledown shack. Over a year, they put in the backbreaking labor required to raise a field of cotton, despite the many difficulties: lack of food (they eat only what Sam can shoot or catch), lack of vegetables during the winter (Jot develops pellagra), and lack of running water. That last forces Sam to take water from a well owned by his neighbor, Henry Devers (J. Carrol Naish), who would like to see Sam gone.

One of the films Jean Renoir made in Hollywood during his exile after the Nazi conquest of France. Finley, Henry's creepy, possibly mentally disabled son, is played by Norman Lloyd.