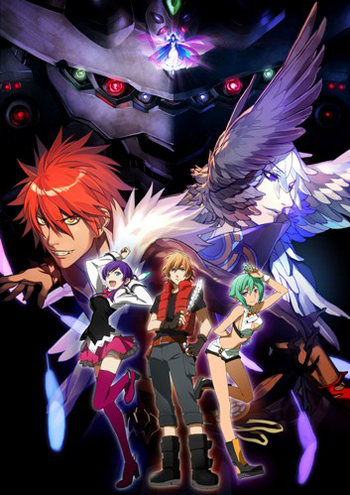 The sequel to Shoji Kawamori's orgasm-powered mecha series Genesis of Aquarion, which started airing on 8 January 2012 as part of the Winter 2012 Anime lineup.

Please note that if you have not seen the preceding series, Genesis of Aquarion, then huge spoilers follow.

Twelve thousand years ago, Apollo, Sirius and Touma realized the need to set aside their differences and form Aquarion together for the last time in a Heroic Sacrifice to save Vega, the world they all live in, from total collapse. Before doing so, however, Apollo promises his lover, Silvia, that they would meet again in 12,000 years.

Fast forward to 12,000 years later: Vega is once more at the mercy of unknown enemies, this time the "Abductors" from the enigmatic world of Altair. DEAVA, the organization which fought Touma and his Shadow Angels twelve millennia ago, has since evolved into Neo DEAVA, hosting Holy Angel Academy, an Academy of Adventure with a strict policy of separate education for Element Users, teenagers with special powers — a Military School for males, and a Church Militant for females. With a new threat to humanity looming on the horizon, Neo DEAVA sends its best boys and girls to fight them using the Aquaria, a pair of Humongous Mecha, each formed from three Vectors — Type-M for males, Type-F for Females. Into the scene comes Amata Sora, a boy working at a movie theater, and Mikono Suzushiro, a girl he meets there. When an Abductor attack puts Mikono in danger, Amata is forced to unleash his Element power — flight induced by emotion — and, unwittingly levitating into the cockpit of a Vector-Z, breaks the long-standing taboo between male-female Unions and revives the legend of Aquarion. As Vega braces itself for a showdown with Altair, more secrets regarding both worlds, its denizens, and even the Aquarion itself slowly unfold...

An OVA for the series has been released in 2015. It takes place in Showa-era Japan and tells the story of Shin Tsukishima and Yuno Kawazu, who get caught in the middle of a new battle involving both the casts of Evol and their predecessors.